Table of Contents show
1 1. Interact with her
2 2. Tell her what she loves to hear
3 3. Have open communication with her
4 4. Be intimate with her
5 5. Give her your undivided attention
6 6. Take her words seriously
7 7. Settle any argument first before asking her for lovemaking
8 8. Stimulate her mind
9 9. Don’t rush her
10 10. Talk about sex with her

One of the complaints most women have about their partner is that he is so clueless about the things that please her. On the other side of the coin, this is men’s problem too. They’re so clueless about how to please their partner whether outside or inside of the bedroom. This is so because women can be unpredictable. They want one thing in one moment and want another thing in the next. This gap, no matter how simple it seems, can make men feel a sense of being a lousy partner. But you can avoid this predicament by knowing the right moves that can please your partner and make you an excellent lover.

Interacting with her means listening to her when she speaks up. The topic might not arouse some interest in you but the fact that you listen with intent can mean the whole world to her. Women want more interaction than men.

While hanging out with your buddy means watching together your favorite games on TV, for women it’s deeper than that. They want more connection and intimacy. Being with them physically isn’t enough. They love to talk to you about anything. When you’re able to master the skills of a good listener, she always wants to be with you. A good conversation can be a start for a pleasant trip to the bedroom.

2. Tell her what she loves to hear

Women love compliments. They love to be adored. They love even a simple chit chat with you. When your partner looks great in her undies, voice out your appreciation. Let her know how she turns you on. Your words may be simple but they can stimulate her mind, making her orgasm faster when you’re in bed later.

3. Have open communication with her 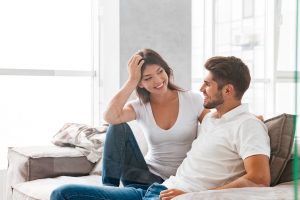 A communication gap can be an unnecessary source for relationship issues when you’re unable to iron things out. Molehills can turn into mountains when you prolong her agony of not talking things over. A woman can’t thrive in an unstable relationship, which is characterized by a lack of communication. Your day may be busy, but as much as you can, try to reply when she sends you a text asking how your day turns out.

4. Be intimate with her

Casual sex may be an acceptable norm for today, but not most women agree to the idea. You may coax a woman to have casual sex with you but it may make her feel shameful after. For most women, sex is an intimate act for two people who care for each other. Try to be intimate with your partner to make her feel important and valuable in your life. Without intimacy, she might think that sex is the only thing you want from her.

5. Give her your undivided attention

When you’re together, see to it that you’re totally present with her. A lot of women complain that their partner is physically present but mentally absent. This can often lead to cheating. Women are naturally drawn to men who are attentive to them. When their partner is unable to do it, they’re likely to look for someone who’s able to give them the attention they crave for.

We can’t blame women for this. They’re just hardwired for intimacy and connection, which makes it difficult for them to have a partner whose mind is somewhere else.

Women are as delicate as a baby. It’s easier to make them giggle when you know the exact parts to tickle. But this doesn’t mean they can’t be taken seriously. When they’re not in the mood, you can’t persuade them to do something they don’t want, like having sex. Respect her words when she says stop because it won’t go unnoticed. And you’ll get your reward later for being such a good boy.

7. Settle any argument first before asking her for lovemaking

Men and women have different perceptions when it comes to arguments. Men want to resolve conflicts through sex while women want to talk about it first. Trying to persuade her to have sex with you after an argument can only fuel up her anger. She doesn’t want to be touched when she’s angry and unable to process her emotions. She will only ease up when you’re able to talk about the matter over. After she’s settled down, she’s likely to respond more eagerly to fiery sex with you. 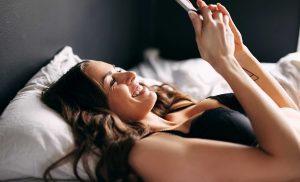 The brain is a woman’s other sex organ. You can sexually stimulate her through her imagination. If you plan to have sex with her sometime later, start by sending her sexy text messages. Use words that can arouse her or talk dirty. This is one secret to making her orgasm faster during actual sex.

You don’t have to rush her because she might not like it. And when she’s able to match your sexual urges of the moment, you can drive her crazy without even realizing it.

10. Talk about sex with her

It’s ironic that two people who find pleasure in one activity fail to talk about it more openly. For some reason, most couples don’t talk about sex or when they do, they feel uneasy. No matter how uncomfortable it might seem, talking about sex can solve bedroom issues that each of you may have harbored deep within.

There might be some moves your partner wants but feels embarrassed to let you know. As a man, you’re in the best position to initiate this kind of conversation with her. Ask her how she wants to be caressed or which part of her body she wants you to touch. This kind of communication can improve your performance and the way she will respond, which can lead to a more gratifying sexual experience.

10 Tips for a More Powerful Orgasm